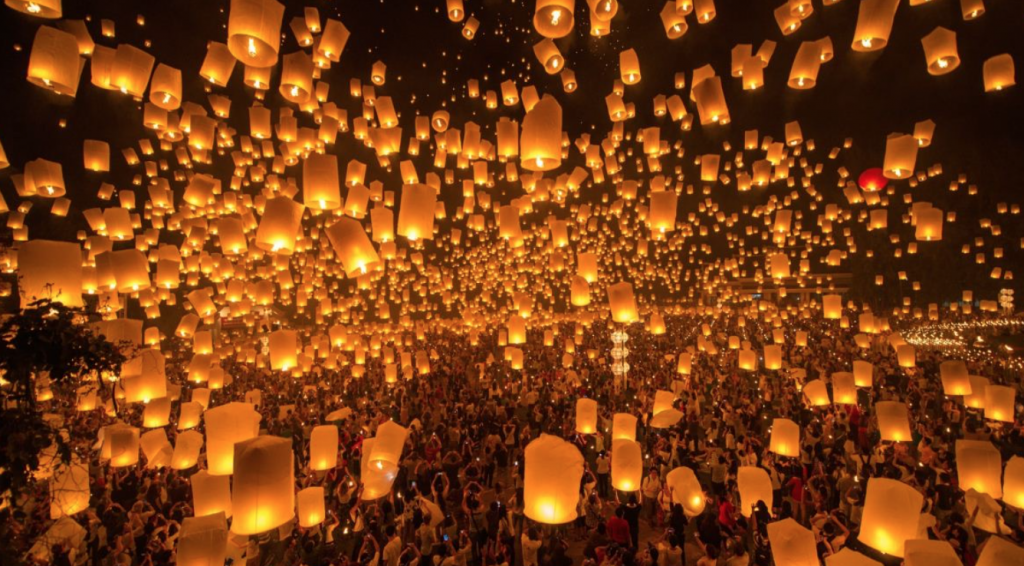 This past summer, I decided to experiment with the “digital nomad” lifestyle. As I researched different locations to post up for a month or two, one place kept popping up over and over again: Chiang Mai, Thailand. After spending some time there and talking to other remote workers and long-time expats, I feel like I can offer a pretty informed opinon of what this place is all about. So, is Chiang Mai a good place for freelance writers? Or should you set up shop somewhere else? 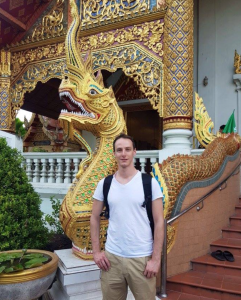 This city of around 500,000 inhabitants located in northern Thailand, surrounded by a breathtaking landscape of rain forests and mistcapped moutains dotted with golden Bhuddist temples. For many years this city was relatively unkown to the outside world, but in the past decade it has became famous as the preimer location for location-independent entrepreneurs and freelancers.

Why Chiang Mai? A big part of the draw is the fantasic value you get for your money here. It is possible to live comfortably on $1000/month, and that includes housing, utlities, transportation, eating out, getting drinks, tourist attractions— everything. If you’re bringing in $2000/month or more here, you can ball out here. Personally, I spent around $2500, because I didn’t feel like pinching pennies, and since I also had an unexpected medical issue and had to pay for treatment with cash (also cheap). It is quite possible to live here on as little as $600/month, but you might not want to try (more on that later).

Understandably, this insanely low cost of living has attracted so many location-independent workers and entrepreneurs from around the world that Chiang Mai is now considered the mecca of the digital nomad movement. This includes not only freelance writers, but programmers, drop-shippers, designers and almost any other type of work that can be done remotely. I honestly do not understand why the city has remained so cheap considering how many foreigners are pouring in here and how often it gets mentioned online, but it shows no signs of changing.

This concentration of people working remotely makes it great for networking. Coworking spaces like Punspace put on happy hours pretty often, and all these startups people are launching will certainly need sales copy, blog posts and other content written for them. If you’re a freelance writer who is proactive about connecting with people, you’ll probably be able to find some business.

There is also just a cool, friendly atmosphere here. If you came here to work online, there are a lot of other people here doing the same thing, and you can get plugged into a social circle very easily. It’s kind of like freshmen orientation in college where everyone just kind of makes friends with and chats with everyone. You really can just show up and very shortly, you’ll have healthy social circle hang out with. This is another reason why Chiang Mai has become a popular spot for people working remotely. 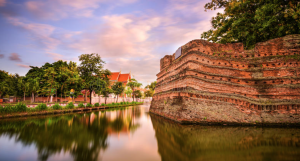 Do NOT swim in the moat.

No place is perfect and Chiang Mai is no exception to that rule. There are many articles and videos creating the impression that this city is some sort of paradise, but it’s important to balance that with a dose of reality, because there are 3 issues here that made me rethink whether I could ever set up shop here permenantly.

1) First of all— we need to talk about driving in Thailand. The method of choice for getting around in Chiang Mai is a motorbike, and, well…people in Thailand drive like homicidal maniacs. This is true of any city in Thailand, but more people are inclined to try driving a motorbike in Chiang Mai because it is a relatively small city and people think it’s “safer” compared to driving in Bangkok.

This is true…up to a point. People still drive really fast, constantly cut each other off, and don’t ever seem to signal. The concept of “right of way” doesn’t seem to exist here at all. Have you ever watched a flock of birds or school of fish, and seen them all suddenly change direction simulatenously? You think to yourself, “how the f— did they all know to change direction at the same time?” That’s kind of what driving in Thailand is like. They also drive on the left side of the road here, so that may through you off depending on what country you’re from.

If you get out into the countryside, there will be much less traffic, so you’ll probably be fine out there, but driving in any Thai city can be a nerve-wracking experience, and that unfortunately goes for Chiang Mai too.

2) Simply put, if you came to Thailand to party, Chiang Mai is not the best place to be. After the military coup in 2014, the government imposed a strict midnight closing time for bars all over the county. That rule was eventually lifted nationwide, but for some reason, Chiang Mai has not lifted that rule. Bars close promptly at 12:00, though there are a few after-hours clubs like Spicy which will keep going past midnight after the doors close.

Don’t get me wrong— there are some good bars and lounges here. While everything is open, Chiang Mai is a lot of fun at night. The best places to go out are the Nimmanhaemin neighborhood where most digital nomands choose to live, and the area of bars centered around Zoe in Yellow in the Old City.

As far as dating goes— it’s no secret that Thailand is a fun place to be if you’re a single guy. I used Tinder during my stay in Chiang Mai, and ended up meeting a nice girl who I hung out with for most of the month I spent there (side note: be sure to carefully examine each profile before swiping right. Some of these “ladies” are, uh, not what they appear to be…)

Now I was happy with this, but I can tell you right now that if you’re a guy who is trying to party and date a lot of different girls, Chiang Mai is not the place to do it. This is a small city and it is very common to run into people you recognize in public. If you are trying to be a player here you WILL get caught. You’re better off posting up in Bangkok if that’s what you’re in to.

Oh, and as far as the seedier elements of nightlife that Thailand is known for…you won’t see much of that in Chiang Mai, thankfully. The combination of this small-city atmosphere and the early closing times keeps most of the hookers, sex tourists and pervs far away from here. It does exist, but it’s not all sleazy and in-your-face like it is in other parts of the country.

I can’t speak on what it’s like for women who are trying to date here, but there are plenty of local fellas to choose from, as well as dreadlocked hippie backpacker types if that fits your niche, so pick your posion. Most of the “falang” (foreigner) women I met here were either backpackers passing though, or digital nomads who were in a relationship with someone who also worked remotely. Chiang Mai a popular place for location-independent couples looking to enjoy a chilled-out lifestyle.

Now, in the grand scheme of things, none of these problems I mentioned above are that big of a deal, but there is one more issue we need to talk about. It’s a classic example of just a little too much of a good thing.

4) Life here is easy…a little bit too easy. Everything here is cheap, the pace of life is pretty releaxed, and almost all the amenities you could want are availible.

The problem— at least in my opinion— is that it is very easy to become complacent in a place like this. The tranquil atmosphere and very low cost of living allows people to just kind of check out of life, and settle for making the minimum amount of money necessary to maintin their lifestyle. It’s already happened to hundreds of foreginers who came here, were seduced by the low prices and just contented themselves with making a few hundred dollars a month. Many of them overstay their tourist visas illegally, and this eventually became such an issue that the Thai government started cracking down on it, though it is still very widespread.

Many will just get a job teaching English— not because they enjoy teaching, but because it seems “easy” and will allow them to remain in the country on a work visa.

It’s a very easy trap to fall into. Look, I’m not knocking those who live here. I made some good friends during my stay, and I actually do plan to come back at some point. Here’s the thing, though: if someone wants to take some time off and chill out in a beautiful, tropical locale, I think that’s great….but there is a difference between that and moving to a cheap city in a developing country, doing the minimum necessary to get by, and not living up to your full potential.

There are, unfortunately, more than a few (most younger) foreigners in Chiang Mai who have chosen that path. It’s okay to mingle with these people and make friendly chit chat, but if you’re a freelance writer (or any other kind of freelancer or entrepreneur) who wants to be successful, you can’t allow that kind of complacent thinking to affect your mindset or work ethic.

Surround yourself with people who will push you to be better. You can find them in Chaing Mai too, you just have to look a little harder (I guess that’s true anywhere). 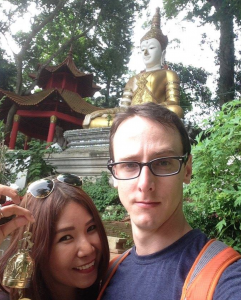 So, is Chiang Mai a good choice for freelance writers? I would say YES, it is, especially if you’re just getting started out and you’re on a tighter budget. If the problems I mentioned above are not a deal breaker for you, then the pros do outweigh the cons.