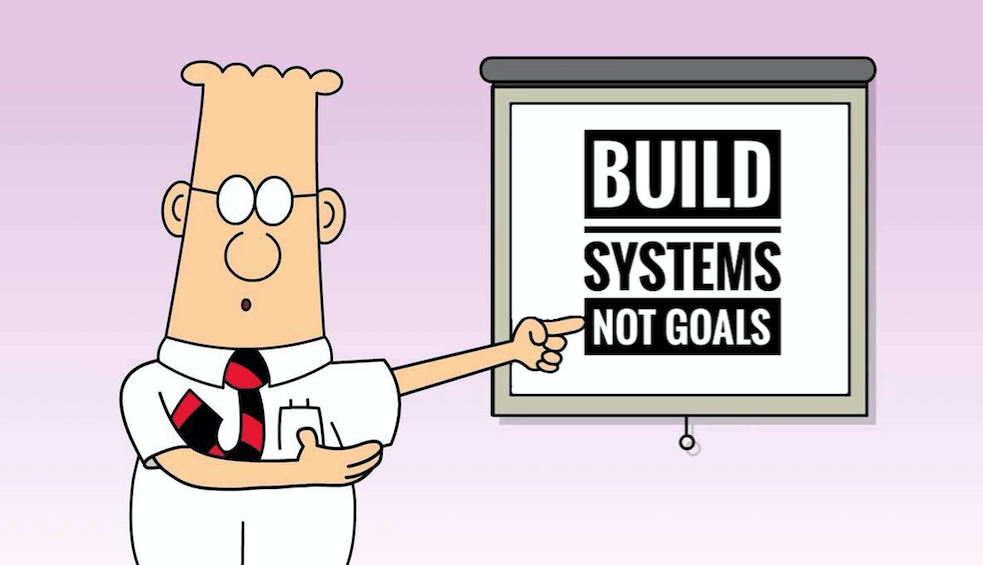 Of the best books I’ve ever read on self-improvement or business wasn’t written by a marketing guru, sales expert, or a Fortune 500 CEO. Not even close.

How to Fail at Almost Everything and Still Win Big: Kind of the Story of My Life was written by Scott Adams, a corporate guy-turned-cartoonist/entrepreneur. One of the things I love about his book is that Scott has such a contrarian way of looking at work and life. There are multiple examples of this in his book, and it would be worth it to write a whole post covering these ideas. But today we’re going to focus on only one idea in the book— one that is perhaps the toughest pill for some readers to swallow: His philosophy on setting goals:

“To put it bluntly,” Scott boldly states,“goals are for losers”.

Let’s face it— we live in a very results-driven, goal-oriented culture. From the time we can walk, most of us are taught at least on some minimal level about the value of setting and achieving goals. It’s not surprising then that many people find this kind of talk about goal-setting to be not simply wrong, but almost heretical.

On the surface, it appears to make no sense, and it’s tempting to just write it off as B.S. But it would be a mistake to dismiss this notion. It’s not quitter talk; Scott Adams is one of the most successful cartoonists in history, with a net worth in the high 8-figures, in case you’re wondering. It’s worked for him, and it has worked for many other successful people too.

In fact, you choose to adopt this approach, you may not even need to change your actions that much. Rather, it’s about adopting a different mindset— one that could produce much better results for your business.

Scott Adams’ basic argument is that following a system of behaviors is a more effective way to get what you want than setting a goal. Here’s how Scott describes it:

“For our purposes, let’s say a goal is a specific objective that you either achieve or don’t sometime in the future. A system is something you do on a regular basis that increases your odds of happiness in the long run. If you do something every day, it’s a system. If you’re waiting to achieve it someday in the future, it’s a goal.” [emphasis mine]

For example, let’s say Dave currently has a “dad bod” and he sets a goal of “Get a ripped beach body before summer”. This is how most people approach getting in shape.

What happens all too often is that people start going to the gym, don’t see the results they want very quickly, and become discouraged. Dave is no exception.

Each day as Dave looks at where he is now physically, and then thinks of the idealized future body he wants, one thought is continually reinforced in his mind: “I’m not seeing much progress. I’m not there yet.” It’s easy to see how this can lead to “this is too hard, why bother?”

Now let’s say his friend Jim approaches the same challenge by adopting a System: committing to eliminating sugars from his diet and doing 100 push ups, sit ups and bodyweight squats a day.

Each day as Jim follows these steps, a different thought is reinforced in his head: “I did my exercises today. I ate right. I’m winning.“

The shift is one in perspective. In both examples, Dave and Jim might be following the same exercise routine, but Dave is discouraged because he is fixating on a distant future he has not reached yet, while Jim is focused on that one box he needs to check off every day.

Basically, the Goals Mindset is end-state and future-oriented, while the Systems Mindset is process and present-oriented.

Systems are focused on improving the odds of success, rather than on a specific end-state.

This can be applied to anything. You may say “I want $10,000 in my savings by the end of the year”. Why do you want that? For financial security. That’s a goal.

Let’s try a Systems Mindset instead. Instead of focusing on that 10k goal, you can commit to automatically transferring a percentage of your income into savings each month. The money just goes there, automatically. No sacrifice or willpower required. Stick with it, and it is inevitable that you will reach that 10k, perhaps sooner than you expected. That’s a system.

In the video above, Scott himself correctly describes the act of going to college as a system and not a goal. Why? Because the majority of us who attend college are not 100% sure what kind of job we want when we begin our studies, but we do know that attending college, generally speaking, improves one’s odds of landing a lot of desirable jobs. Similarly, landing one of those jobs is a goal, but dressing well and researching the company before getting an interview is a system that will increase your odds of getting hired.

The Systems Mindset is especially useful for business activities where you do not necessarilly control the outcome, such as cold calling. If you’re making cold calls, the fact is that each call is going to end one of three ways: a Yes, a Maybe, or a No — and more often than not, it’s going to be No.

So rather than thinking “I need to close 10 deals by the end of month”, try adopting a Systems Mindset: Just commit to making 25 cold calls a day, and don’t get attached to the outcome of any one conversation. Remember that the Law of Averages is ironclad and that (assuming your list is intelligently designed) if you keep following your system you will, eventually, get a “Yes”.

It’s a contradiction, I know

Now some of you are probably thinking that this is all bullshit, because the only reason you even adopt a system in the first place is to achieve a goal.

The real takeway from Scott Adams’ book is to just try looking at acheivement differently by focusing on smaller, doable tasks performed on a regular basis which take you in the right general direction, as opposed to single-minded focus on a desired end-state. It is much less psychologically taxing, and the regular mental reinforcement that you “won” for the day will give you the confidence to keep at it until you inevitably get what you want.

I’m not saying goal setting is pointless. I still belive there is a lot of value in it, particularly SMART goal-setting, since it helps you measure your progress. But I have to say that adopting a more Systems-oriented approach to my work has drastically increased my productivity. Devoting 1 hour a day to a project and just putting in my time each day helps me get it done a lot faster than thinking “I need to finish this ASAP”.

Another example: I recently began training Brazilian jiujitsu, a discipline which kind of forces you to adopt a Systems Mindset. I showed up to each class and put in the work, month after month, without focusing on getting promoted to a higher rank. Sure enough, I just got stripes added to my belt last week, and was taken by surprise when it happend. I was too busy just enjoying the process and improving my skills to even think about rank advacement.

I’m not trying to settle the Systems VS Goals debate with one blog post, and I know not everyone is going to be convinced given how deeply ingrained goal-setting is in our culture. But even if goal-setting has served you well in life, try out the Systems Mindset and see how it works. Don’t be surprised if it allows you to now only meet, but surpass whatever desires you originally had.

Buy How to Fail at Almost Everything and Still Win Big: Kind of the Story of My Life on Amazon. 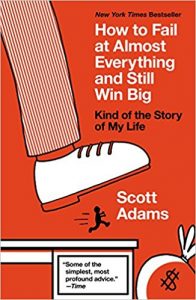